The Downtown Garner Association partnered with Kentrell Perry, owner of Locs, Naturals, and More (LNM), to commission a two-story mural by Garden of Journey, otherwise known as Charlotte-based artist Georgie Nakima and 3 local apprentices. The mural features a large portrait of a young Black woman, rendered in vivid color and surrounded by geometric and natural visual elements. Wings frame her neck, and contain smaller portraits of four influential members of Garner’s Black community. The people represented include (from left to right):

The mural also ties in symbols referencing local Black churches and the cabinet shop of Henry Fort, the first enslaved citizen to open a business in Garner.

Thanks to our Funding partner 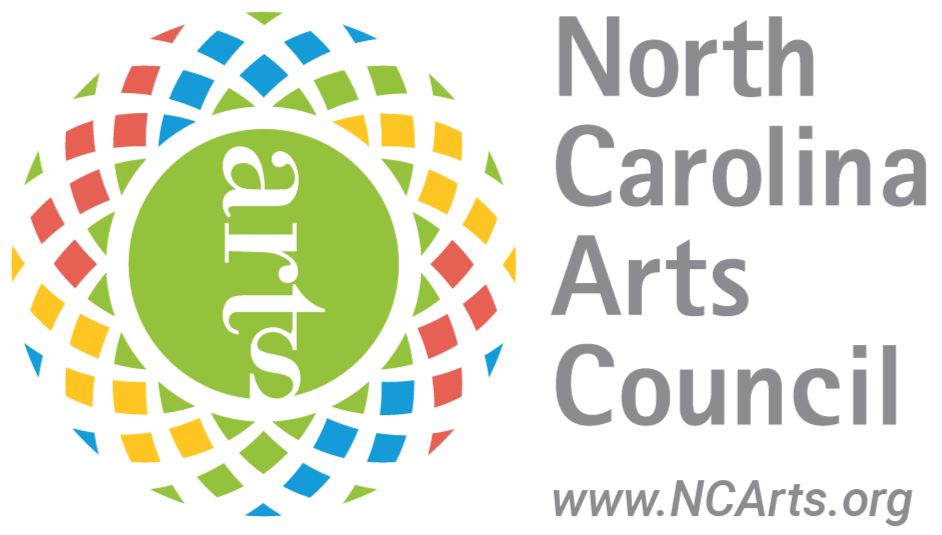 This project was supported by the N.C. Arts Council, a division of the Department of Natural & Cultural Resources. NCArts.org

News Coverage of the Mural

The project kicked off with a community gathering attended by 25-30 people. The event brought community members, Downtown Garner stakeholders, elected officials, town staff, the Garner Police Department, and local news media together to help the artist prime the mural. Kentrell Perry hosted the event with the Downtown Garner Association. Perry conducted extensive outreach to the local news media and two local channels sent reporters to film the community event. The mural and kickoff event served as a backdrop for dialogue between the Garner Police Department and the Black community, following a recent incident at LNM that was successfully de-escalated through calm communication and community intervention. Members of the GPD joined Perry and his family and friends to help prime the mural, while talking about opportunities for joining forces for the community’s betterment in the future.

Nakima painted the full mural over a two week period in October 2021. She hired 3 apprentices to help her at various times with the painting. The project garnered significant public attention, in addition to coverage from the local media, with several citizens driving or stopping by daily to check on the mural’s progress. The monthly Garner Night Market took place around the mural site towards the end of the project. Over 2,000 people attended and had a chance to view the mural during the event. Georgie and her apprentice continued painting during the event and took several breaks to talk with the crowds about her work.

The Mural is a vibrant tribute to Garner’s Black community the incorporates local history, influential citizens, important cultural symbols, and natural elements that are meaningful to the Black North Carolinian experience. This project allowed Garner to add another phenomenal piece of public art to our historic downtown, which is becoming a destination for the cultural arts. The mural marks a central gateway in our downtown and is contributing, not only as a place-making attraction, but also as an homage to the important roles that Black citizens have played in Garner’s past, present, and future. 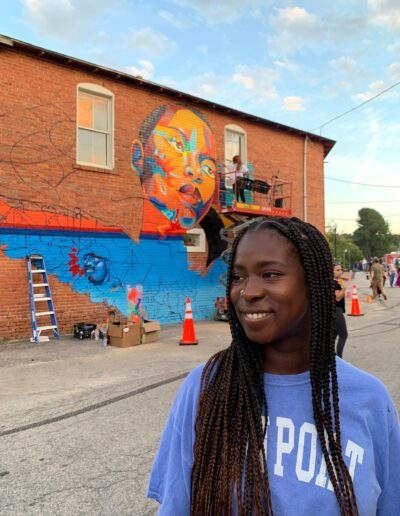 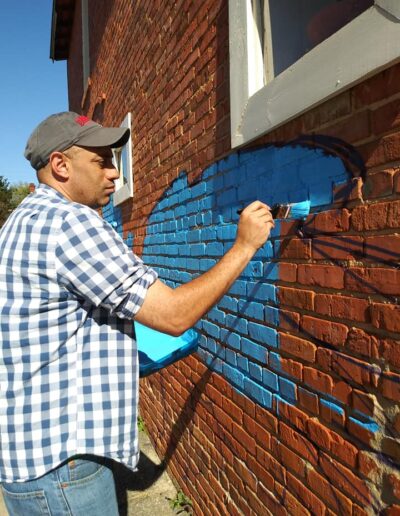 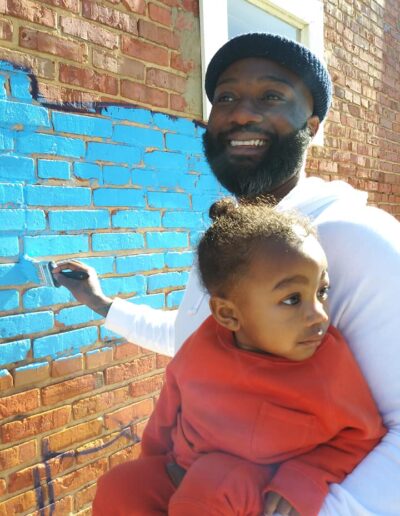 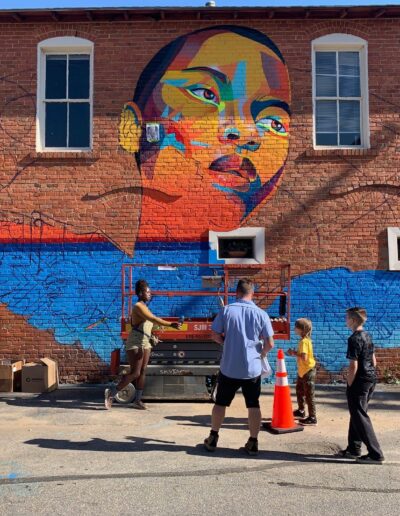 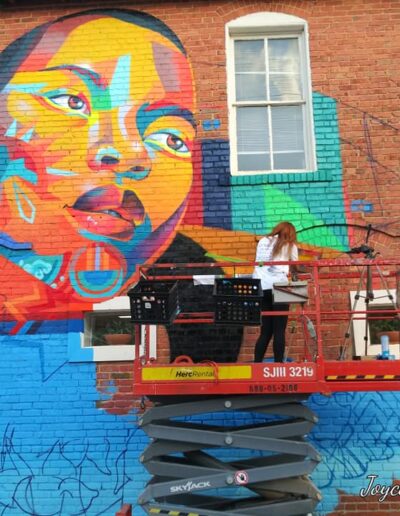 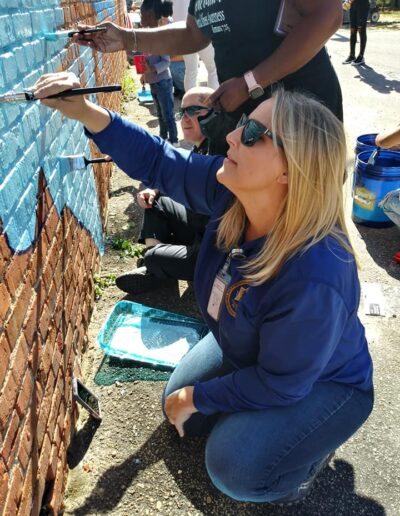 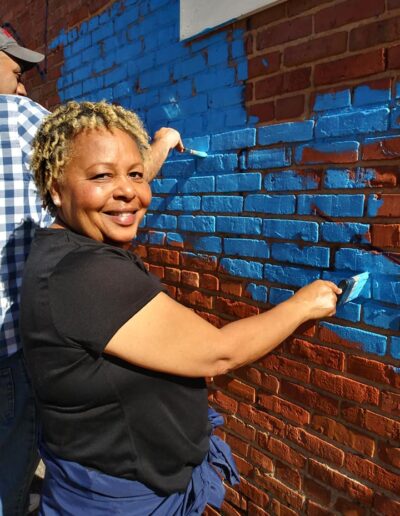 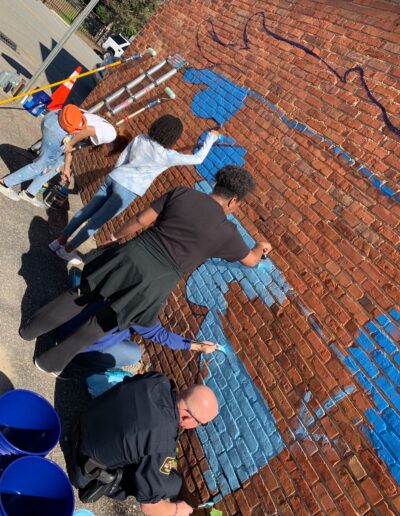 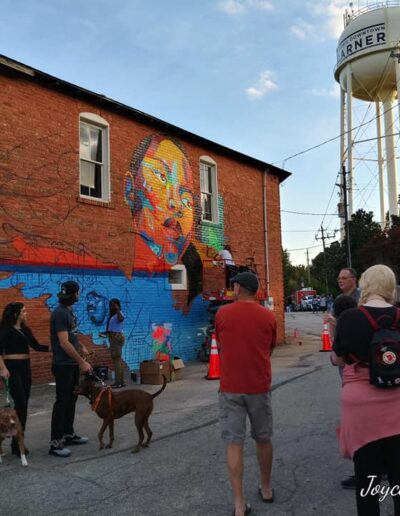 Getting to Know Garner’s Hidden Figures 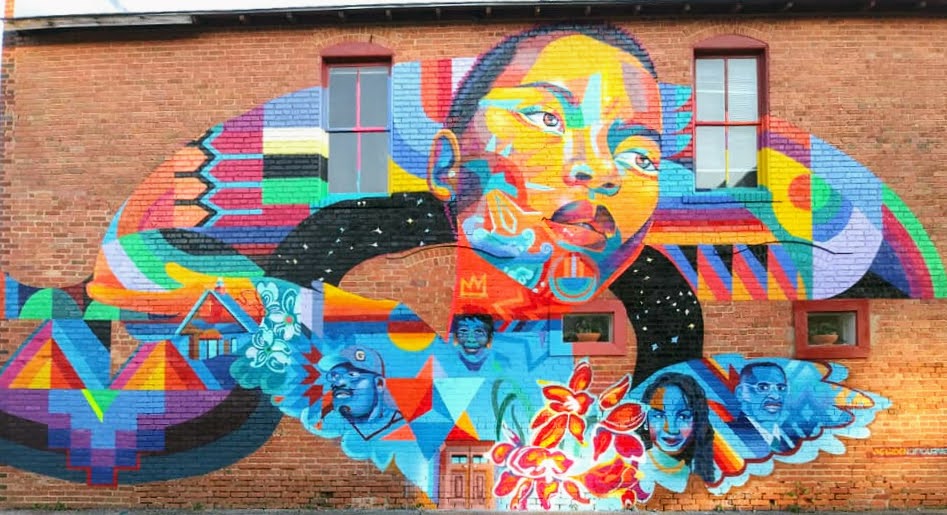 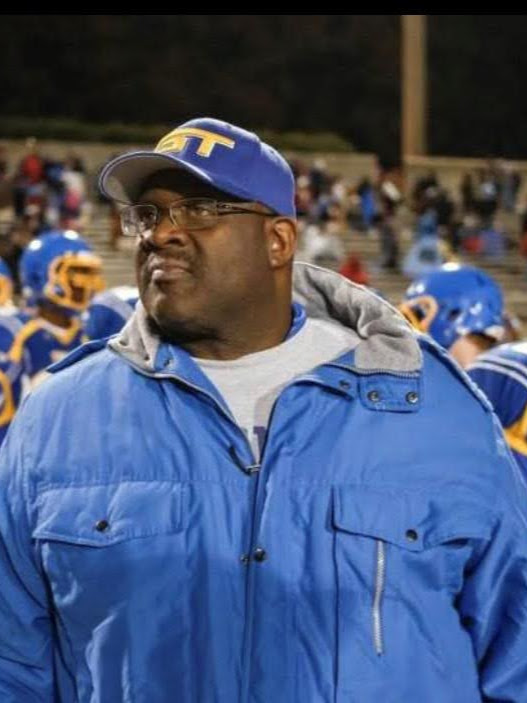 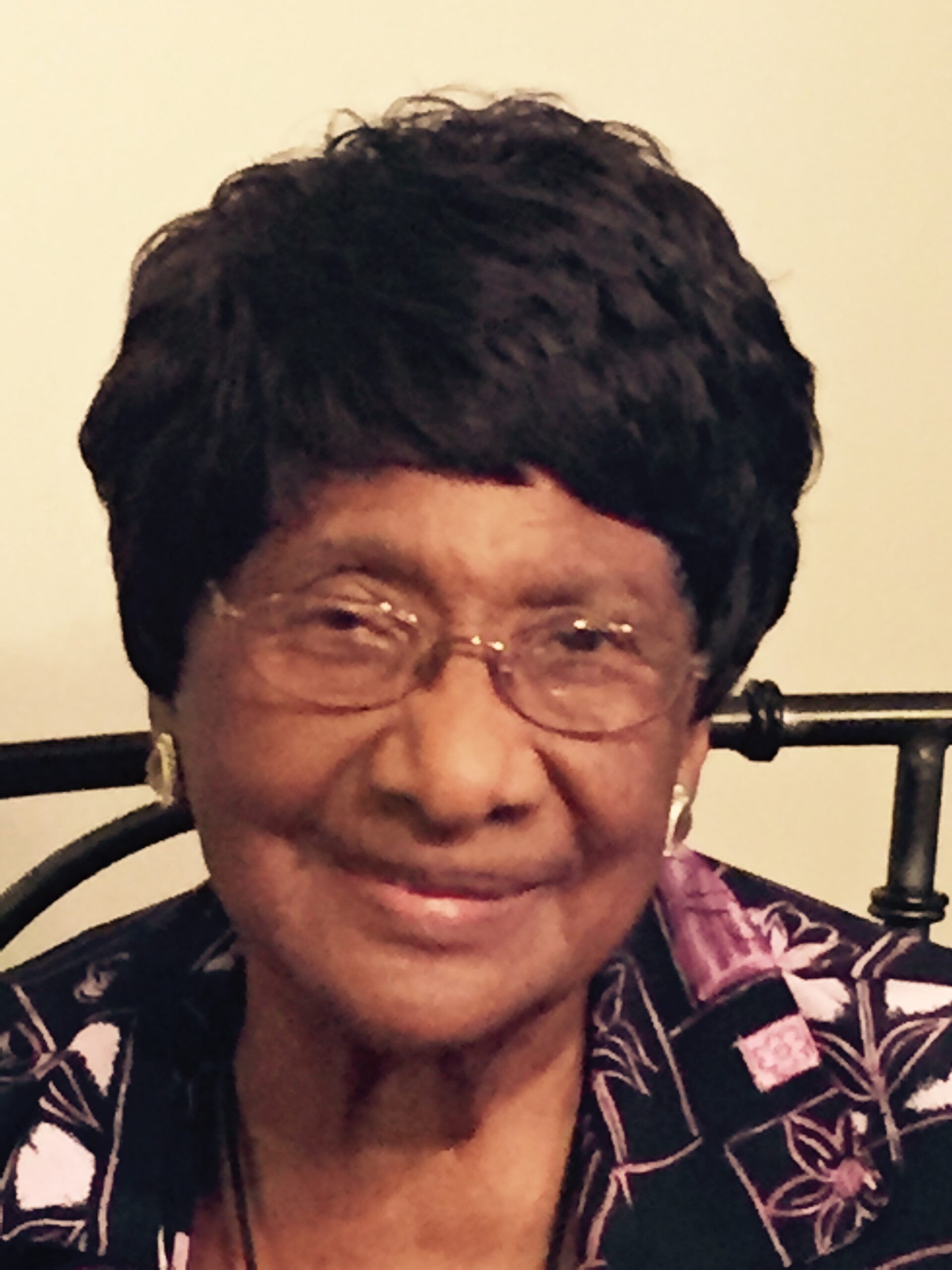 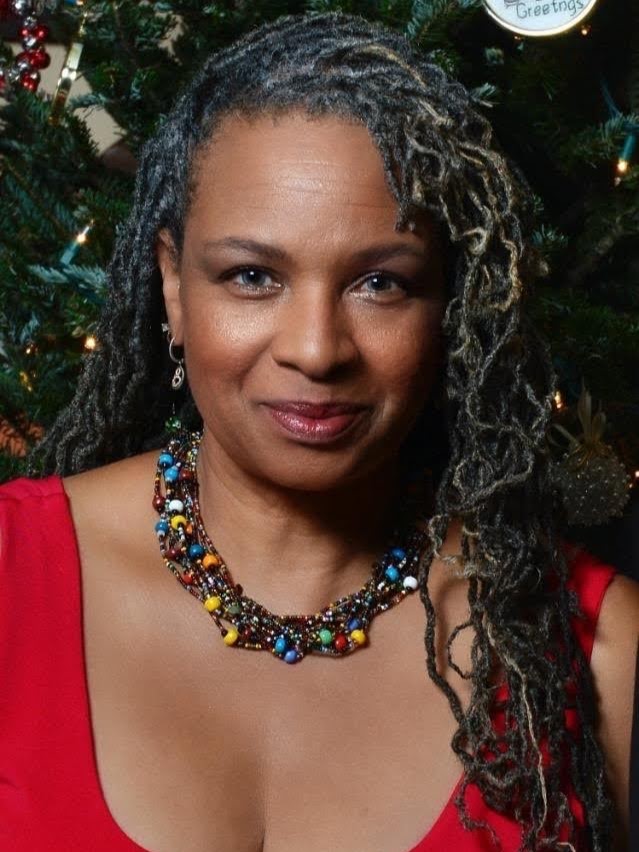 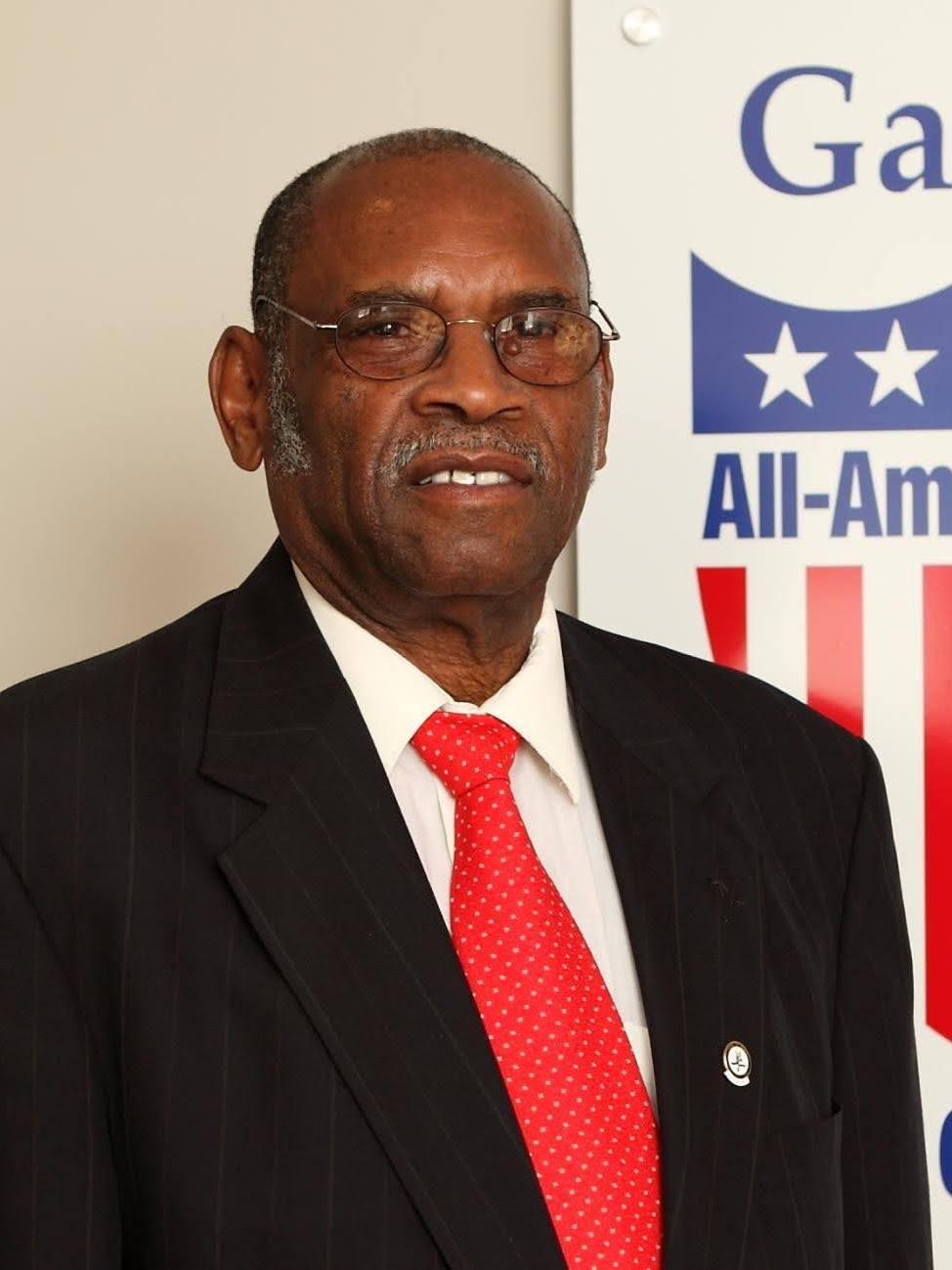 “Hidden Figures” developed as a way to honor members of Garner’s Black community that have made an impact on Garner in their own unique way.  Some of the people included in the mural were well known for their roles as outspoken activists or elected officials.  Others made quieter but no less important contributions  as coaches, entrepreneurs, and community leaders, investing in their communities day by day with fellowship, generosity, and wisdom.  The community members included in this important work of public art stand as representatives for the invaluable contributions – the values, experience, culture, and history – that all of Garner’s Black citizens bring to our great community.

Coaching for over three decades at Garner Senior High, Thurman Leach has steered young men and women not only on the field but in the classroom. In modern society, sports often serve as a “right of passage” for children, as the overcome challenges that teach them qualities such as confidence, respect, perseverance, empathy, and sportsmanship.

Coach Leach, an all-American at Gardner-Webb University who played four years at Fuquay-Varina High School, knows this process well and has guided many of Garner’s youth through this process as they become valuable and trusted citizens. Teaching strength and conditioning, his unique signature can be identified throughout all of Garner Magnet High School’s athletics programs.  His dedication to others, display of pose, and archetypal qualities of a coach, has made him one of Garner’s most influential citizens. We are excited to showcase Thurman Leach and his legacy.

Helen Phillips never got elected to public office, but she left no less of a legacy behind during her 93 years of life.  Well known in the Garner community, Mrs. Phillips delighted in standing up for the rights of others and for speaking truth to power.

While Helen lived through Jim Crow and experienced segregation in Wake County, she was still moved to be a strong advocate and a hopeful promoter of her hometown.  Community leaders share stories of her commitment to voicing her opinions and pushing the town’s elected officials to do better.

Through perseverance and steadfastness, Mrs. Phillips was instrumental in convincing the town to put in sidewalks to make the community safer and to start the first Martin Luther King Jr. birthday celebration in 2011.  The late Garner Mayor Ronnie Williams said of Helen: “She has been a leader in Garner as long as I’ve known her. She’s been an activist. What I’ve always admired about Mrs. Phillips is her drive to accomplish what she sets out to do. She may not win every battle, but she’s working toward winning the war.” We honor Helen Phillips for all of the good she’s done as a leader in her community.

Salons are a modern-day oasis for many, especially in the Black community, where people go to enjoy fellowship, learning, protection, creative collaborations and personal revitalization. To preside over this “oasis” an individual must have the respect of the community and demonstrate compassion, wisdom, creativity, honesty, generosity, and patience permeates.

Mal-Selika Perry has been such a person for the Raleigh/Garner community. A Fayetteville native, she has raised two children, married for 39 years, and owned a salon for 25 years. Community service is a staple within her salon, teaching at-risk youth and helping battered women through her various technical skill programs. She teaches not only cosmetology, but inner engineering, with techniques such as mediation, diet, yoga, and relationship counseling. Mrs.Perry is retiring in April 2022 and her legacy lives on through the countless students she has stewarded. We are honored to immortalize her contribution to the Raleigh/Garner community within our mural.

Jackie Johns was known as the people’s politician, because he looked out for the interests of every citizen in town. Mr. Johns served as a Town alderman and, later, Town Council member for a total of nearly 36 years during three separate tenures. A native of the Auburn community, Mr. Johns was the first African American elected municipal official in town history and served as Garner’s only African American elected official during his entire time on the Board of Aldermen and Town Council.
Mr. Johns helped lead Garner as it grew and evolved in numerous ways. The Town’s population was approximately 7,000 when Mr. Johns won his first aldermen election in 1973. At the time of his passing, Garner had over 31,000 residents. Garner was named an All-America City during Mr. Johns’ tenure, and he proudly served as a delegate with the citizen-led team that traveled to Denver to earn the prestigious national recognition in 2013. Following his passing, the community recognized Mr. Johns in a unique way. In response to a remarkable petition drive that collected over 1,000 signatures, the Town Council in August 2019 voted unanimously to change the name of Rand Mill Park to Jackie Johns Sr. Community Park.

It is believed that Henry Fort and Thomas A. Bingham had the first businesses in Garner. In 1874 Henry Fort, an African American farmer, cabinetmaker, and carpenter, purchased 52 acres of land from Eli Dupree on the north side of the railroad. Moses N. Amis wrote in his book Historical Raleigh in 1913 that Fort was “a fine carpenter who made bureaus, wardrobes, and almost any piece of furniture the people wished.”  He sold off portions of his land to other African American families, including Partha Taylor, Candice Taylor, a midwife, and Thomas Haywood. A cabinet was included in the mural to represent Henry Fort’s business, since no identifiable photo of the formerly enslaved business owner is known to exist. 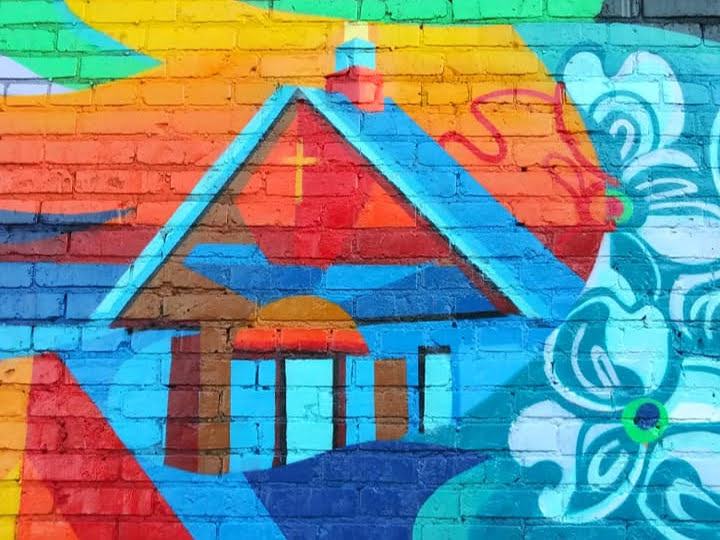 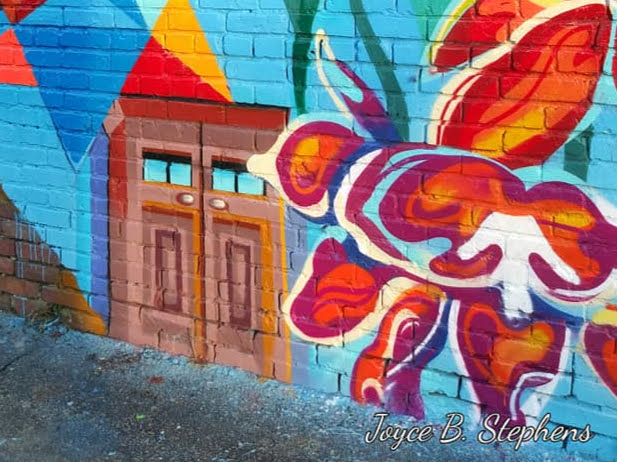 Special thanks to Joyce B. Stephens and Demian Dellinger for use of their photographs.